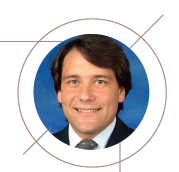 In just a few years the internet has revolutionized daily life, becoming part of every aspect of society. However, the coming transformations may go much deeper, leading to major changes in the paradigms of vertical markets such as healthcare, energy, the environment etc. Daniel Kofman, a researcher at Télécom Paris, has been sketching out the future profile of the internet and examining the challenges of it for several years.

Are we witnessing a turning point in the history of the internet?

There have been three generations in the development of the internet. The first one started with the earliest form of the internet network, included the emergence of the Web 1.0 as a major service infrastructure and finished at the end of the millennium with the development of broadband connectivity. The second generation is that of the interactive web, the explosion of social media and the generalization of cloud computing and mobile internet. We are now entering the third generation, in which digital technology has become the principal conveyor of innovation within most vertical sectors, due in particular to the gradual fusion between the real and digital worlds. This fusion takes place through changes and developments such as the internet of things, Big Data and advances in virtual and augmented reality.

What will the internet of tomorrow offer society?

The merging of the digital and real worlds is taking place through digital technology’s capacity to ‘observe’ the physical world thanks to extensive use of sensors to the infrastructures of the internet of things. This makes many things possible like, for example, medical systems based on real-time monitoring of citizens’ health; optimization of the energy equation through enhanced visibility of consumption, production and storage of energy; integration of diverse transport systems based notably on real-time traffic and demand monitoring, and progression towards Industry 4.0 (self-organized plants and components for efficient mass production of personalized products). This new generation will bring another way of understanding and designing systems, infrastructures and services as well as the underlying technologies, and new societal challenges. 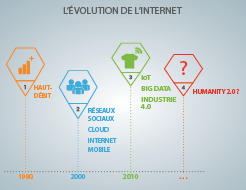 In order for the digital world to ‘understand’ what is happening in the real world, the data captured must be transformed into information, knowledge and cognition: in other words, a learning process that will allow the digital world to make increasingly complex decisions in an autonomous way. This capacity requires advanced digital modeling of the real world for the captured data to be interpreted correctly. Processing this large quantity of data, which is highly varied and most of the time unstructured, relies on a series of approaches that are often encompassed in the term Big Data. Improving Big Data solutions demands new, multidisciplinary working methods: we cannot extract knowledge from the data measured without an understanding of the field that has generated them and without comprehending how they have been captured and filtered.

Lastly, this merging of the digital and real worlds involves action, in other words the digital world’s ability to control connected objects in the real world, and therefore to have an impact on it. The mentioned merge is therefore a process of observing, of analyzing-understanding-learning, then making decisions and acting.

Does this turning point imply a change in the current infrastructures?

Cars, houses and cities of the future will become service platforms, like our smartphones are today. Instead of statically configuring isolated systems for pre-designed services, these infrastructures will be general and programmable in order to dynamically create new services and applications, meeting users’ needs in real time. These programmable infrastructures, based on paradigms like the virtualization of the entire technology chain, constitute a major challenge that is shaking up industries in the field.

What prospects does the internet of things open up for industry?

While the ‘all-connected’ era is still a few years away, the number of connected objects is already increasing exponentially and industrial firms are undergoing reorganization to be able to take advantage of these structural changes. During the first decade of this century the internet was shaped by big American companies, but the forthcoming turning point may allow France and Europe to catch up: the internet of things will open up multiple opportunities thanks to the merging of digital technology with vertical markets, and France and Europe are very well positioned in fields such energy, transport and healthcare.

What is IMT’s positioning in these challenges?

In this context, IMT’s academic research and partnership research is already well known. Our strength lies in part in the fact that we have expert knowledge and skills in information and communication technologies, as well as in the fact that we have always built very strong ties with the industrial sector. Our researchers are working on anticipating the challenges raised by connected things, and contributing to the construction of the internet of tomorrow. A good illustration of this is our contribution to the study titled ‘Internet: prospective 2030’ for France Stratégie. However, research continues to advance very quickly.

Born in Uruguay, Daniel Kofman came to France with a degree in engineering. In 1993 he earned his PHD and in the same year he was taken on as a Research Professor at Télécom Paris. Since then he has held various positions of responsibility and carried out high-level missions. They have included consulting for major industry players, acting as an expert for various national and international institutions (he is notably a member of the Scientific Committee of the Parliamentary Office for the evaluation of scientific and technological decisions, OPECST, in the French National Assembly), and presidency of the Management Board and scientific coordination at the Euro-NGI, the European network of excellence, which he co-founded in 2003. He is also a founder of two start-ups as well as LINCS (see insert). For Daniel Kofman, the accumulation of all these roles serves a purpose. “These missions are not independent of each other, but are mutually enriching,” he explained. However, this workload has never prevented him from continuing to give classes at Télécom Paris, which he has done for over 20 years. “Transmission has always been my principal aim”, he admits. “Moreover, feedback from high-quality students also provides food for thought”. Simply put, he works to define the communication networks of the future and, of course, to communicate his own knowledge. 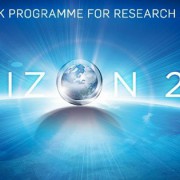 Augmented Man – humanity searching for a meaning
Scroll to top