You are here: Home1 / News2 / Mines Nantes and Télécom Bretagne sign a Cooperation Agreement with the U... 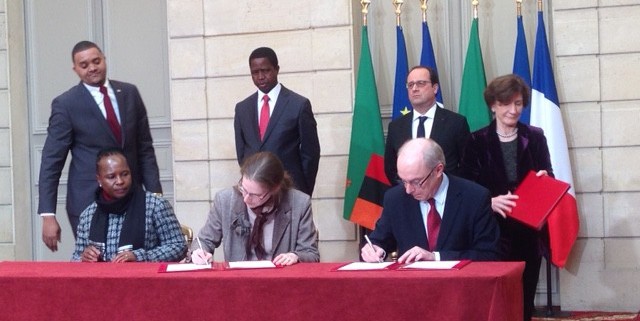 A cooperation agreement was signed between the University of Zambia (UNZA), Mines Nantes and Télécom Bretagne, two IMT engineering graduate schools, on February 8, 2016 at the Élysée Palace, under the auspices of French President François Hollande and the President of the Republic of Zambia, Edgar Lungu, currently on a State visit to France to establish an exchange program and academic and scientific collaboration in areas that the three establishments hold in common.

The signing between Anne Beauval, Director of Mines Nantes, Paul Friedel, Director of Télécom Bretagne, and Professor Enala Tembo-Mwase, Vice-Chancellor of UNZA took place in the presence of the French Ambassador to Zambia, Emmanuel Cohet, the Zambian Ambassador to France, Humphrey Chibanda, and the Director General of Campus France, Béatrice Khaiat.

Zambia, a democratic and stable English-speaking country with a population of 14 million, boasts strong economic momentum (7% growth, number one exporter of copper in Africa…) and is attracting an increasing number of French companies. Approximately twenty are established in Zambia, or are in the process of doing so: Lafarge, Total, Bolloré, Schneider, Alstom and Vinci, to name just a few.

The cooperation agreement signed between Nantes École des Mines, which will soon merge with Télécom Bretagne, part of IMT, and the University of Zambia, seeks to expand the international academic networks in order to support excellence in teaching and research, and establish joint scientific research programs between the two countries. This agreement is also aimed at promoting exchanges between the establishments in terms of teaching activities, and educational engineering and research, including student exchanges for a period of study, internship, or research.