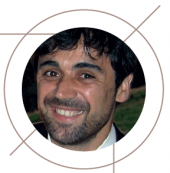 Stéphane Avril, a researcher at Mines Saint-Étienne, describes himself as a “biomechanics” but would like to become a “mechanobiologist”, a switch from studying the mechanical properties of the body to decoding its biological mechanisms using engineering tools. Focused in particular on analysis of the behavior of normal and pathological vessels, his work should have significant consequences on treatment for various vascular illnesses, and has already led to several industrial partnerships.

“Research at Mines Saint-Étienne was originally organized around three main activities: mechanics and materials, manufacturing and processes engineering, and company performances. After adjustments and reorientation within the manufacturing industry in France, the idea emerged of setting up an ‘Engineering and health’ research center, which would develop the School’s three main activities but orientate them towards the fields of biology and medicine”, explained Stéphane Avril.

The researcher was hired in 2008 to develop biomechanics in health, a discipline that analyzes the mechanical behavior (movements, deformations) of tissue and organs (blood circulation, articulations etc.). He has been managing the ‘Engineering and health’ center at Mines Saint-Étienne, made up of sixty or so people, since 2010.

The work of the biomechanics team led by Stéphane Avril, composed of twenty or so engineers and researchers, has a “double backbone”, he explains. “The first subject, more biologically-themed, tends towards predicting the development of certain cardiovascular illnesses, such as aneurysms (dilatations) of the aorta, thanks to studies on the resistance of the vascular wall”. The second focuses on the treatment offered by medical fabric in the general sense including, principally, compression stockings but also knee braces, lumbar belts etc. “This second field was developed at the request of certain industrial players. The region is the largest in Europe for manufacturing these textiles”, the researcher added. “The approach we have adopted entails working on an application, such as a piece of software, in order to see if it can resolve a medical problem. This translational research, driven by its practical benefits, is one of the school’s specialties.”

Predicting the effects of elastic compression on a subject’s leg

Since 2008 the biomechanics team has been working with vascular surgeons at Saint-Étienne who implant stent grafts (prostheses placed inside the diseased vessel) in patients with aortic aneurisms that are in danger of breaking, with the aim of protecting the aneurism sac from the blood flow. This operation rebuilds a solid aortic ‘wall’.

Stéphane Avril has started an important program that has received grants from the French National Research Agency (ANR). The program’s objective is to better adapt stent grafts to the characteristics of the aneurism through mechanical calculations and the use of industrial software. “These questions, which may seem applied research, have raised fundamental issues that have been acknowledged by the international community”, the researcher indicated. In particular the team is interested in enzymes (metalloproteases) and their participation in the weakening then dilation of the artery wall.

In December 2014 Pierre Badel, a researcher in the laboratory, was given a starting grant by the prestigious European Research Council (ERC) for his work on the prevention of aneurism rupture as part of the AArteMIS (Aneurysmal Arterial Mechanics: Into the Structure) project. At the beginning of 2015 Stéphane Avril was also honored by the ERC with the ‘consolidator grant’ for the BIOLOCHANICS project. Through this project, the team of researchers aims to develop a new approach to treatment of aortic aneurisms. Mines Saint-Etienne will thus receive 3.5 million euros over 5 years for research into aneurism rupture. In addition, within 5 years Stéphane Avril’s team hope to identify the signs of arterial instability with the support of companies specializing in magnetic resonance imaging (MRI). Over time the research should lead to work on medication and regenerative cell treatments, in connection with industry.

All this work takes us from classical biomechanics (analysis of movements and deformations) to mechanobiology which aims to predict the changes in the microstructure of an organ, in this case vessels, taking into account the mechanical constraints acting on its location. We could even talk of cellular mechanobiology, inasmuch as the researchers at Mines Saint-Étienne attempt to understand better the influence of mechanical changes on the cellular working itself (protein constructions, chemical reactions etc.)

A leader in medical compression

Within a few years Stéphane Avril’s team was a European leader in soft tissue biomechanics, “one of the cutting edge subjects at Mines Saint-Étienne”. The researchers are especially well-known for their work in the field of medical mechanical compression. Some of this research aims to better understand venous compression devices, associated with the wearing of contention stockings, and is carried out in collaboration with the companies Sigvaris and Thuasne which specialize in the manufacture of these fabrics. Thanks to a recent study using ultrasound by a young PhD student, in partnership with Sigvaris, it has been shown that elastic compression exercises a type of pressure on soft tissue that tends to reduce stagnant blood in venous microcirculation. This would explain the positive effect of contention on superficial varicose veins.

Other work, using magnetic resonance images, suggests that this compression has an effect on deep veins in the leg more through contraction of the leg muscles than by the passive transmission of pressure to the vein wall itself.

A good example of the importance of biomedical engineering

It is clear that Stéphane Avril’s work is an excellent illustration of the multiple possibilities made available by the development of biomedical engineering techniques, including a better understanding of physiological and pathological processes and an improvement of treatments.

Biomechanics and mechanobiology are necessarily multidisciplinary fields because they are situated at the interface of engineering, the health profession and industrial development, and should offer even more contributions in the years to come.

After starting at Mines Saint-Étienne, Stéphane Avril received funding from the ANR (French National Research Agency), using MRI to identify what may cause atherosclerotic plaques formed in the carotid arteries to break in patients.

Recently, the team’s biomechanics looked at complications of coronary angioplasty, work which consists of dilating the coronary arteries of the heart, shrunken by atheroma, in order to improve flow. One of these complications, called a dissection, occurs when part of the dilated coronary artery wall tears lengthways. Using simulations, Stéphane Avril and his researchers have identified the pathological processes that occur and have shown that some of these occurrences may be factors of secondary coronary obstruction.

Aged 38, he joined Mines-Saint-Étienne in 2008 as a professor and researcher. After a degree in math and studies in engineering followed by a PhD at Mines Saint-Étienne, he chose a career as a researcher in engineering sciences, first applied to the field of materials and then health.

During his PhD thesis he applied new photomechanics technology to analysis of the properties of materials. Then in 2003 he worked in Châlons-en-Champagne in the mechanics and manufacturing laboratory, directed by Fabrice Pierron, at Arts et Métiers ParisTech, where he developed new mathematical tools for using photomechanical data. In 2006 a year spent in the laboratory directed by Jon Huntley at Loughborough University in Great Britain enabled him to better understand the advantages of MRI data for analyzing living tissue. Between May and August in 2014 Stéphane Avril completed his training with a sabbatical in the American laboratory directed by Jay Humphrey at Yale University in the USA, in order to start working on mechanobiology. In January 2015 he received the prestigious European research grant from the ERC.