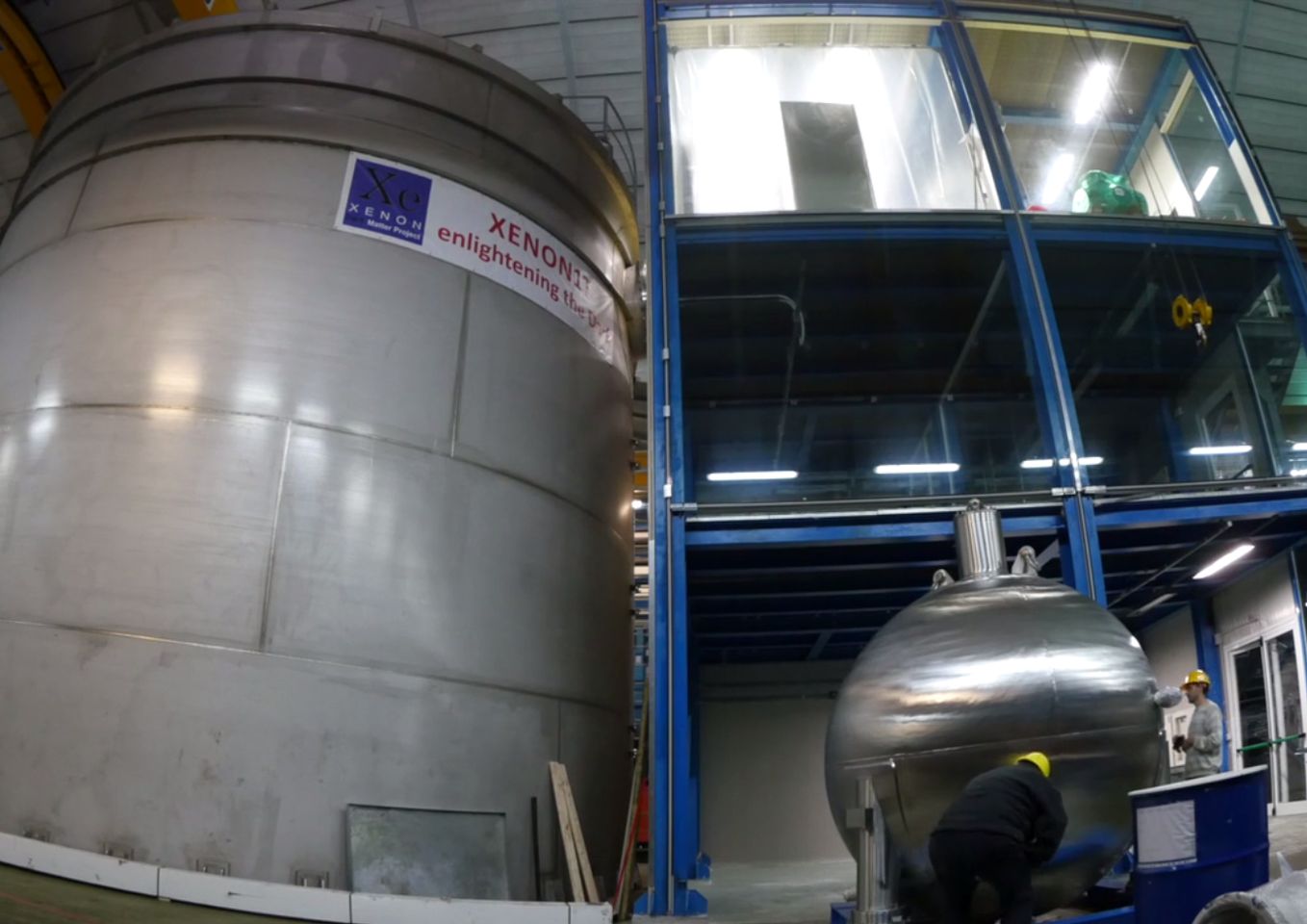 From the ancient gnomon that measured the sun’s height, to the Compton gamma ray observatory, the microscope, and large-scale accelerators, scientific instruments are researchers’ allies, enabling them to make observations at the smallest and largest scales. Used for both basic and applied research, they help test hypotheses and push back the boundaries of human knowledge. At IMT Atlantic, researcher Dominique Thers, motivated by the development of instruments, has become a leading expert on xenon technologies, which are used in the search for dark matter as well as in the medical field.

The search for observable matter

Detecting dark matter for the first time is currently one of science’s major challenges. “It would be a little like radioactivity at the end of the 19th century, which disrupted the Maxwell-Boltzmann equations,” Dominique Thers explains. Based on the velocity measurements of seven galaxies carried out by Swiss astronomer Fritz Zwicky in 1933, which contradicted the known mass of these galaxies, a hypothesis was made that a type of matter existed that is unobservable using the currently available means and that represents 27% of the matter in the universe. “Unobservable” means that the particles that form this matter interact with traditional baryonic particles (protons, neutrons, etc.) in a very unusual manner. To detect them, the probability of this type of interaction occurring must be radically increased, and there must be a way of fully ensuring that no false event can trigger the alert.

In this race to be the first to detect dark matter, developing more powerful instruments is paramount.  “The physics of particle detectors is a discipline that has become increasingly complex,” he explains, “it is not sufficiently developed in France and around the world, and it currently requires significant financial resources, which are difficult to obtain.” China and the United States have greatly invested in this area, and Germany is the most generous contributor, but there are currently few French teams: “It is a very tense context.”

Currently, the most sensitive detector for hunting down dark matter is located in Italy, where it was built under the mountain of Gran Sasso for the XENON1T experiment. Detection is based on the hope of an interaction between a particle of dark matter and one of the xenon atoms, which in this experiment are liquid. The energy deposited from this type of interaction generates two different phenomena –  scintillation and ionization – which are observable and can be used to distinguish the background. 150 people from 25 international teams are working together on this experiment at the largest underground laboratory in the world.

Society asks, what is the purpose is of observing the nature of dark matter? We may only find the answer 25 years from now,” the researcher explains. Dark matter represents enormous potential: five times more prevalent than ordinary matter, it is a colossal reservoir of energy. The field has greatly developed in 30 years, and xenon has opened a new area of research, with prospects for the next 20 years. Dominique Thers is participating in European reflection for experiments in 2025, with the goal of achieving precise observations at lower ranges.

While the xenon used for this experiment possesses remarkable properties (density, no radioactive isotopes), it is unfortunately a raw material that is rare and cannot be manufactured. It is extracted by distilling air in its liquid phase, using a very costly process. Xenon is indeed present in the air at 0.1 ppm (parts per million), or “a tennis ball of xenon gas in the volume of a hot air balloon,” Dominique Thers explains, or “one ton of xenon from 2,000,000 tons of liquid oxygen“.

The French company Air Liquide is the global leader in the distribution of xenon. The gas is used to create high-intensity lights, as a propellant for space travel and as an anesthetic. It is their diamond “in a luxury market subject to speculation.” And luxury products require luxury instruments. For those created by the researcher’s team, xenon is used in its purest form possible. “The objective is to have less than one ppb (part per billion) of oxygen in the liquid xenon,” the scientist explains. This is made possible due to a closed-circuit purification system that continuously cleans the equipment, particularly from all the impurities from the walls.

The technology of xenon in the form of cryogenic liquid is reserved for the experts. Dominique Thers’ team has patented expertise in storing, distributing and recovering ultra-pure liquid xenon.

In a measurement experiment like the one for dark matter, there is zero toleration for radioactive background noise. “Krypton is one of xenon’s natural contaminants, and it is the original source of xenon after cryogenic distillation produces 94% krypton and 6% xenon,” the researcher explains. However, the isotope krypton-85 is created by human activities.

In the XENON1T experiment, we start with a few ppm (parts per million) of natural krypton present in the xenon, which is far too much. “All the types of steel used in the instrument are selected and measured before they come in contact with the liquid xenon,” the researcher adds, explaining that in this instance they obtained the lowest measurement of background noise using an experimental device.

The first promising results will be published in early 2018, and the next stages are already taking shape. The experiment that will start in 2019, XENONnT, which will use 60% of the equipment from XENON1T, aims to achieve even greater precision. Competition is fierce with the LZ teams in the USA and PandaX teams in China. “We can’t let anyone get ahead of us in this complicated quest in which, for the first time, we want to observe something new,” Dominique Thers emphasizes. He estimates that, all told, 50 to 100 tons of extra-pure xenon will be needed to refute the possible presence of observable dark matter or, on the contrary, measure its mass, describe its properties and identify possible applications.

When working with this type of trans-generational research, parallel research within shorter time frames must be carried out. This is especially true in France, where the research structure makes it difficult to fully commit to instrumentation activities.  Budgets for funding applied research are hard to come by, and researchers also devote time to teaching activities. It would be a shame if so much expertise developed over time failed to make a groundbreaking discovery due to a lack of funds or time.

To avoid this fate, Dominique Thers and his team have succeeded in creating a virtuous circle. “We’ve been quite lucky,” the researcher says with a smile. “We have been able to develop local activities with a community that also needs to make advancements that could be made possible through medical imaging using liquid xenon.” At the university hospital (CHU) in Nantes there is a leading team of specialists in cancer therapy and engineering who understand the advantages xenon cameras represent. The cancer specialists’ objective is to provide patients with better support, and better understand each patient’s response to treatment. In the context of an ongoing State-Regional Planning Contract (CPER), the scientist convinced them to invest in this technology, “because with a new instrument, anything is possible.”

The current PET (Positron-emission tomography) imaging techniques use solid-state cameras that require rare-earth elements, and only a dozen patients a day are effectively screened using this technology. Xenon cameras, which use Compton imaging, the only technique that can trace the trajectory of a single photon, uses triangulation methods to ensure the 3D localization of the areas where the medicine has been applied.

The level of precision is therefore improved and opens the way to possible benefits to treat more patients daily or monitor the progress of the treatment more regularly. The installation at the CHU in Nantes is scheduled for 2018, initially for tests on animals before 2020. This should convince manufacturers to make a camera adapted to producing an image of the entire human body, which would also undoubtedly require several million euros of investments, but this time with a potential market of several billion euros.

Just like the wave–particle duality so treasured by physicists, Dominque Thers and his team have two simultaneous facets. “They could have a short-term impact on society, while at the same time opening new perspectives in our understanding of the universe,” the scientist explains.

Pushing the limits of nature

Dominique Thers believes he “fell into research accidentally. “As someone who enjoyed the hard sciences and mathematics, he met researchers during an internship in astronomy and particle physics. “The human side convinced me to give it a try,” and he began working on a thesis with Georges Charpak, which they defended in 2000. He joined IMT Atlantique (formerly Mines Nantes) in 2001, and since 2009 he has been in charge of the Xenon team which is part of the Subatech department, a Mixed Research Unit (UMR) with the University of Nantes and the CNRS. This mixed aspect is also present in the cultural diversity of the PhD and post doctorate students that come from all over the globe.

The researcher’s motivation is whole-hearted: “It’s wonderful to be exposed to the limits of nature. Nature prevented us from going any further, and our instruments are going to allow us to cross this border. “The young researchers, who are exposed to scientific culture, perceive these limits and are drawn to the leading teams in this field. Dominique Thers is also an entrepreneur; in 2012, with three PhD students, he founded the AI4R startup specialized in medical instrumentation. 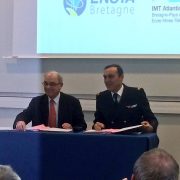