Water preservation and management involves detecting its pollutants. Among those most frequently found in surface water and groundwater are weed-killers, such as the well-known glyphosate. At Mines Alès, Ingrid Bazin is working on developing innovative bioreceptors to monitor these small molecules, with the aim of one day providing the water industry with cutting-edge biosensors.

The number of water pollutants is rising, including for example heavy metals, pesticides and preservatives. More than 800 substances are listed as being potentially harmful, 43 of which are regulated in France. The European Water Framework Directive of 20 October 2000, transcribed in France by the Law of 21 April 2004, aims to restore surface water and groundwater to good chemical and ecological condition by 2015, and put a stop to the discharge of certain dangerous substances – the 50 most urgent to eradicate – by 2020. The Laboratory for environmental industrial engineering (LGEI) at Mines Alès, and in particular the ESAH (Water, Anthropogenic Systems and Hydro Systems) team, works on diagnosis, measurement and analysis of environmental pollutants by developing biodetection tools (bioreceptors and biosensors). The ESAH team is principally made up of analytical chemists and it is strongly involved in the water competitive cluster in Montpellier as well as in the Montpellier Institute for Water and the Environment. “Our quality of life depends a lot on our environment” Ingrid Bazin reminds us, “and our initial objective is to improve the quality of our water-based ecosystems, as there are direct consequences on our level of health”. Herbicides are endocrine disruptors and have a direct impact on our hormone system, which is the cause of the famous feminization process in animal populations, notably among fish, which leads to an imbalance in the ecosystem and potentially catastrophic long term consequences for biodiversity and our health.

Cultivating bacteria in a petri dish of agar-agar

Glyphosate, the most commonly found herbicide in water

The ESAH team’s research is applied. “We work directly with water industry players such as Veolia and BRL (a construction company in Bas-Rhône and Languedoc) with a view to meeting the challenges facing them in the detection of water pollutants” the researcher explains. While efficient and regulated physico-chemical analysis tools are already available, the aim is now to demonstrate the benefits of developing biodetection tools in the environmental sector. Two major requirements are apparent: evaluating the overall harmfulness i.e. the effects of the pollutants in water on humans and the ecosystem, and detecting some molecules that present a challenge for treatment. This is the case, for example, of glyphosate and its metabolite, AMPA. “Glyphosate is not the most harmful herbicide found in the environment, but it is the most common because it is still used by a large number of people. Industrial firms are obliged to monitor it, particularly in sectors that produce drinking water which must not exceed a concentration of 0.1 µg/l” says Ingrid Bazin.

An innovative idea awarded a prize in 2014

The aim is not to instantly detect pollutants like atrazine or hydrocarbons, since analytical chemistry already does this very well, but to optimize monitoring of the water cycle using biodetection tools that are simple to use, robust and inexpensive. The biodetection test must also be sensitive enough. A biological recognition element (i.e. a bioreceptor) with a strong affinity with the molecule in question is required to achieve this. Glyphosate and its metabolite, AMPA, are particularly small molecules for which “standard” detection using enzymatic biodereceptors, antibodies or small DNA fragments is difficult. “My idea is to use peptides of 6 to 15 amino acids, or even small proteins of 80 to 100 amino acids as bioreceptors in order to detect small molecules for which it is difficult to develop an antibody” explains Ingrid Bazin. In 2014 the idea won the “Researchers of the future” grant awarded by the Languedoc-Roussillon region, destined to support projects of excellence by young researchers (under 38 years). The prize money has allowed funding on the subject for the ESAH team’s research work for a year and a half, and notably testing the efficiency of detection of small molecules using a peptide sequence developed in the laboratory (the peptide or small protein that offers the best capacity for binding to glyphosate molecules).

The next stage will consist in developing a rapid test that can be used on the ground, in the form of a test strip that lights up when it comes into contact with glyphosate and AMPA. Then, in time, “all in one” biosensors will be designed to enable the immediate assessment of the concentration of herbicides – available online, what is more. Additionally, the ESAH team is currently a partner of an ANR (French National Research Agency) project Combitox, that is managed by the CEA Cadarache (Atomic Energy Commission). This aim of this R&D project, due to finish at the end of 2015, is to develop an online multi-parameter instrument for continual biological measurement of three types of water pollutant: fecal bacteria, heavy metals and environmental toxins, which are what Ingrid Bazin and her team are interested in. “The innovative feature here is the creation of a biological recognition device: the peptide sequence, which will be perfect for detecting small molecules. It is a real challenge, even though the idea is not a new one, since the design and development of a biosensor is a very lengthy process and requires multiple laboratory and field trials” the researcher concludes. The final aim is to improve water quality and the quality of life of consumers.

Ingrid Bazin started her career in the biomedical sector in the Paris region. After finishing her preparatory studies she entered the University of Versailles in 1996 and then Pierre and Marie Curie University (Paris 6) in 1999, where she studied for a postgraduate advanced diploma in the Biology of Aging. She entered R&D in genetic engineering, researching new drugs to fight cancer and, as one thing led to another, she was drawn into the environmental sector, but this time in the south of France where she studied for a PhD in molecular biology and plant physiology at the CEA Cadarache (Atomic Energy Commission). “My work entailed studying the genes that lead to the accumulation of heavy metals in plants, in order to design tools for removing pollution from soils” she explains. After postgraduate research at ISTMT (Institute of the Science and Technology of Medicine of Toulouse) and having participated in the start-up of the Grenoble-based company Smartox, which specializes in the synthesis of peptides for therapeutic uses, she joined Mines Alès in 2009 as a Research Professor and in 2015 received her Accreditation to Lead Research (HDR). Working in the Laboratory for environmental industrial engineering (LGEI) in the Water, Anthropogenic Systems and Hydro Systems (ESAH) team, Ingrid Bazin applies her knowledge as a biologist to the development of new tools for biodetection of environmental pollutants. 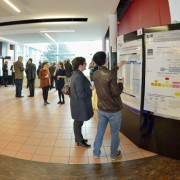 Conference on natural resources and environment

Conference on natural resources and the environment – sign up now!

Frédérique Vincent, new Director of Education and International Affairs at...
Scroll to top